If you’re reading this and you’re from old blighty then that means you’ve survived the storm – so well done. The images that the bbc were putting in the net were quite scary. We’ve had 28 typhoons this year so it seems like the end of the world is nigh.

Before that though here’s some snippets to read over dinner…

My colleague Yasmin teaches an art class in English, it is held in Osaka. It means that anyone can pop along and learn some English and art skills at the same time, after the class the students also show their portfolios. I tagged along and learned how to do ‘sgraffito’ as demonstrated above. It was my first life drawing class being a student and I absolutely loved it. I came out of the class feeling really proud – like when you’ve tidied up, or handed in a piece of work, or…. Eaten fruit. Anyway, it felt wholesome.

Last Tuesday I watched some of the ‘Jidai Matsuri’ which is the festival of ages, it is a parade which runs from the Imperial Palace to Heian Shrine. I wasn’t in a great spot, it was very busy, and I was taking time out of work – so I didn’t stay long. However I’d recommend it to tourists who fancy going next year. I’d say get there early and watch it either from the palace or Heian Shrine. You can see one of my snaps below, there were some very impressive traditional clothes and it was a treat to see the horses. There’s also a fire festival in the evening in Kurama which is north of Kyoto I’ve heard it is something really worth attempting to see.

Musically this past couple of weeks has been pretty varied and exciting. I went to a club night hosted by ‘Night Time High’ at a place called Metro, NTH are the people who did the art event at the skate park I wrote about last time (or the time before??). There were several very diverse dj sets and a live segment, the art continued all night along with the music. I’m enjoying learning more about Japanese hiphop and dance music. This weekend I went to Osaka for a Ska gig. We went to watch a band called ‘Los Tailors’ who were pretty good, we certainly enjoyed their music and I don’t mind admitting that the singer was pretty dishy. However, my highlight of the evening had to be the ‘Osaka Guiness Boys’ who performed folk classics such as ‘Oh Danny Boy’, ‘Loch Lomond’ and my personal fave ‘I’m forever blowing bubbles’. Our group consisted of a good Scottish/English mix so we had a good wee dance. My boss is Irish, but he wasn’t there so he doesn’t count. We bumped into a street party on our way home and eventually made it onto a train home at about 5am. It was cold. 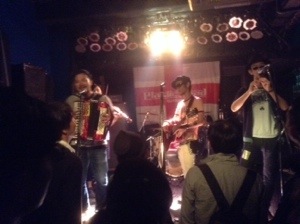 Halloween celebrations have come and gone it here it seems. Browns English held their own party on Saturday which we all thoroughly enjoyed – there were classic games such as the ring toss, and we took the kids trick or treating on a planned trip down the local shopping mart. The shop keepers were given candy to hand the children once they’d managed to say “trick or treat, trick or treat, give us something good to eat” which is quite a mouthful. No pun intended. Ok bad joke. Yasmin and I almost successfully pulled off doing the ‘Thriller’ dance and would have got away with my missing sections of choreography if it wasn’t for Yasmin getting caught up in the spider web of the plant next to her. It was me who put that web there, so to be honest all the flaws were down to me. We still got a generous applause and we only made two children cry. Now to practice a performance for the Christmas party….. 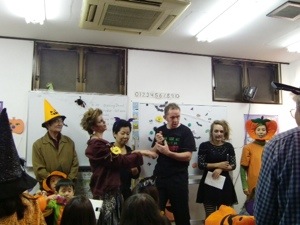 Until next time, love rach xoxox

If you haven’t already; have a listen to ‘I’d rather dance with you’ by Kings of Convenience, it’s been in my head for about two weeks so it might as well be in yours too. There’s a whole section where they sing “getting into the swing ” just under a million times, it can really grind itself into your brain.

I’ve been a little more adventurous recently, I’ve taken myself out of my cycling distance comfort zone and into the realms of Japanese train travel. My first destination was the huge and spectacular Fushimi Inari shrine with its many orange gates. I believe this shrine is one of the shrines one might visit if you wanted your business to do well. You can walk up the mountain through its hundreds of gates to smaller shrines, there are fox statues and dog statues everywhere. At one point an old man was waving at me from the top of a smaller shrine, I thought he was telling me to go away but he was actually beckoning me. Once we’d got past this misunderstanding he showed me a collection of statues which included a family of dogs with puppies, aw. It’s a very, very long walk and if anyone is thinking about doing it I’d strongly recommend taking your own water because at the very top of course they charge over the odds for the stuff.

I’ll be writing a whole blog about transport at some point but not today, so hold your horses – the photos of trains are on their way.

Last week I met an artist called Taphy in a cafe, Taphy used to paint in clubs in Tokyo but now lives and works in Kyoto. She invited me to an event at Hiuchigata skate park which is in south Kyoto. I went to the event on Monday, and wow, Taphy and her fellow artists – so much talent. I had a great time, and met some people who have invited me to some future events at clubs involving art and music so I’m completely stoked. Also, I was told that the crew had recently been in East London! Small world. I’d love to tell you more about them but I want to get the details right first, maybe next time. Here’s Taphy painting….

At the moment Browns English is preparing for our halloween party. Yasmin and I have been trying to put together a dance to Michael Jackson’s Thriller, Tom is finalising the Halloween craft task, and most students I’ve spoken to are making their own costumes from scratch. I’ve got a pretty tight budget this year so who knows what I’ll end up dressing up as. Halloween is a fairly new phenomena in Japan, until the last couple of years nobody here really celebrated it, but now the Japanese have adopted it with a passion – there seem to be a lot of decorations around town already. Christmas isn’t such a big deal, and Christmas Eve is more of a romantic event for couples rather than families. Valentines day involves chocolate for everyone, and I’ve got no idea about Easter but I’ll let you know of it happens.

I’ve popped a photo up of all the current Browns English teachers looking suitably genki, Tom and Mitsumi kindly laid on a BBQ for us and it was a huge success. You may have seen the crocodile….. 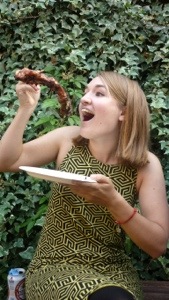 I’ve been in Kyoto for a month!! I’ve survived with all my limbs intact. This week it is also my coworker’s wedding anniversary (congratulations Yasmin and Chris!) and this week it will be the nine year anniversary of Browns English – this is the company that I work for. Browns is a family run company which includes four English schools, a burger bar, and a catering setup which tours festivals. I’ve been helping out at the festivals at the same time as training, it’s a lot if fun and means I get to see lots of temples / shrines I may not have otherwise known about. Browns is run by Tom, an Irish man of many talents, and Mitsumi who is a fantastic business woman and has been invaluable to me in helping me open bank accounts/ find apartments/ getting health insurance. Browns English was featured in a magazine last week, you can see a picture of Tom and Mitsumi below.

So those of you who know me quite well won’t be surprised to know that I’ve been getting naked with the locals. By this I mean visiting Kyoto’s public baths – or sento. These sento are comparable to spas in the UK; there is a very hot pool, a bubbly pool, a cold pool, and often there are saunas and other facilities. The main difference is that here everyone has to be naked, and there are separated halves for men and women. To begin with you have to get naked and pop all your clothes into a locker, you then enter the bathing areas and wash yourself thoroughly. This part is just as important or perhaps more important than the bathing bit. You take your time to scrub away all the stress and grime then make sure you’re rinsed and squeaky clean. Leaving your soap/flannel/combs etc at your wash station you then make your way to the baths, and relax. At first I thought the cold pool would be unbearable but actually it is heaven after you’ve been boiling alive in the hot one. I’m hoping to visit one of Kyoto’s natural hot springs soon too, these are called onsen – and yes you have to be naked for those too.

Until next time! Love Rach xoxox